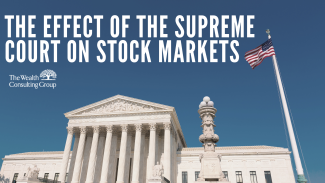 The Effect of the Supreme Court on Stock Markets

President Donald Trump nominated Amy Coney Barrett to fill an open seat on the Supreme Court. And while the confirmation process has divided the country, there is very little conversation about the effects the Supreme Court has on the economy and the markets.

But thanks to a group of academics, the impact of the Supreme Court’s decisions on financial markets has been quantified. And it’s big.

For starters, it makes intuitive sense that legal decisions made by the Supreme Court would have an impact directly on individual stocks, groups of stocks, U.S. markets and indirectly on global markets. Research published in the journal of SSRN – the Social Science Research Network – from Daniel Katz, Michael Bommarito, Tyler Soellinger and James Chen prove the point.

Law on the Market

One of the primary results of the research was that market-impacting “law on the market” events occur on a regular basis.

The research team looked at each one of the 1,363 Supreme Court decisions in the 14-year period beginning with the October 1999 term and ending with the October 2013 term. They then determined which ones could have potentially impacted a publicly-traded company. Next, the team analyzed those companies’ share prices to see if they moved by a statistically abnormal amount after a Supreme Court decision. The team noted that their methodology did take into account other variables, including fluctuations in the markets and other news that could have moved stocks too.

In summarizing the results, the researchers wrote the following:

If investors are wondering whether there are trading opportunities focused around Supreme Court decisions, they should know that the research also reported that only about 6% of Supreme Court cases in those 14 years moved markets.

But clearly some Supreme Court decisions impacted individual stocks more than others. In fact, two examples cited in the research report paint a fascinating picture.

Aereo was a startup in 2012 that allowed subscribers to view “over-the-air” television broadcasts over the Internet for about $8/month. Within weeks of its introduction, broadcasters like ABC and CBS sued, arguing that streaming their content without permission was copyright infringement.

When the Supreme Court ruled in 2014 that Aereo violated copyrights on programming, shares of broadcasters like ABC and CBS soared and that decision boosted the market value of broadcasting companies by about $4.4 billion.

Conversely, Aereo's services were suspended, the company filed for Chapter 11 bankruptcy and was later purchased for $1 million by TiVo.

Myriad Genetics is a molecular diagnostic company based in Utah that owns several proprietary technologies designed to better understand genetics and the roles genes play in the origination and treatment of disease.

But when the Supreme Court ruled that human genes could not be patented in 2013, a crazy two days of up and down for the share price of Myriad Genetics followed.

Myriad ended up losing over $500 million in market value in the two-days around the decision, according to the report.

Investors who trade in individual stocks might want to pay a bit more attention to the Supreme Court.

The opinions voiced in this material are for general information only and are not intended to provide specific advice or recommendations for any individual.

All information is believed to be from reliable sources; however LPL Financial makes no representation as to its completeness or accuracy.

No investment strategy or risk management technique can guarantee return or eliminate risk in all market environments.

This article was prepared by RSW Publishing.